In Mexico, do we save Ralph? 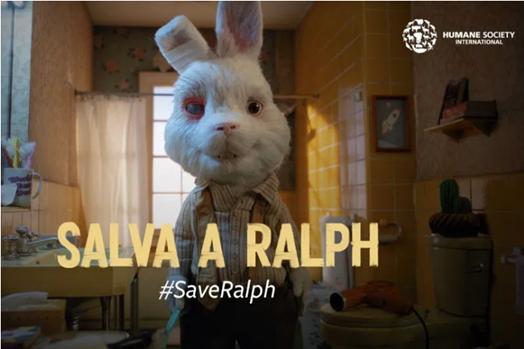 A nice white rabbit named Ralph appeared as the protagonist of an animated short film last April.His story told as a false documentary was a call for help to end the use of laboratory test animals for cosmetic production purposes.Since its premiere “save Ralph” (Save Ralph 2021) went viral in the networks, which caused many people to begin to question reality behind these practices.

In the 4 -minute film in Stop Motion, one day is narrated in the life of the rabbit as Tester -Laboratory Test Animal -as well as the consequences that suffer in your body because humans experience with it.Among other damage the animation shows the loss of an eye, scars and constant pains.

Humanizing his reflections and docile to his destiny, the adorable bunny since his first transmission, was acclaimed by critics.In addition to gaining empathy with the viralized hashtag #saveralph created the controversy over cosmetic laboratories, in the first instance, on the use of animals and the cruelty that implies the elaboration of tools and products for this use.

This controversy had already been raised 12 years ago, when in 2009 the experimentation with animals for cosmetological purposes was prohibited throughout Europe and America.This was settled by the European Parliament, in Regulation (CE) no.1223/2009 - dated November 30, 2009, in Chapter V on Animal Experimentation -.

In this document, experimentation in animals for cosmetic purposes is absolutely prohibited and privileges to resort to alternative methods, as well as the veto in the distribution of said products in case of violating the regulations.(Chapter V, Article 18.League: https: // Eur-flex.Europe.EU/Lexuriserv/Lexuriserv.do? URI = OJ: L: 2009: 342: 0059: 0209: ES: PDF)

Now in our country, in May it set out to make changes to the General Health Law to guarantee this prohibition.Which means that in Mexico the elaboration of brushes with hair of animal origin, pigments of this type would now be illegal, as well as the evidence of allergies and reactions in animals, to mention some examples.

With the technological advances that exist today, it is not really necessaryto use tinted derivatives in vegan versions so as not to resort to animal use in the colors of the formulas.

But then what changes in the law?

Change the status of legality.Before it was only prohibited by the association that regulates cosmetics producers in America and Europe.It was not punishable by law in Mexico, the international body had to be appealed for its intervention in case of breach in the regulation.

If the changes in Mexican legislation are approved, although the sanction is almost the same, -the brand and the product in the market and a fine according to the severity of the infraction -our country would impose the norm, without the need to resort to theforeign parliament.

Among those changes that are proposed are: sanction from 2 to 7 years in prison to those who perform tests in animals, impose an equivalent fine of 200 to 2 thousand times the value of the unit of update measure (approximately 180 thousand pesos) to whomHire, authorize, lead, participate or develop in rabbits or mice, to mention some.

It is worth mentioning that these proposals are currently in an opinion that went to the Senate and have not yet been discussed for approval.

Although it is clear that in most of the world, essays with living beings in the process of making makeup and tools of this type are illegal, in the part of the Asian continent it is not the case.

In China, for example, one of the countries with the greatest production in countless articles for all use and especially in the world of beauty, is where pigments of animal origin are most used and continues to be tested with animals in makeup elaboration.

Shows how badly he wted to make it work.Anyone Can Enter a Mosque, Church, Temple with a Kitchen Knife and Start S ... https: // t.CO/BGPV8MLQ8R

But how can we know if a product is truly free of animal cruelty?There are organizations such as Cruelty Free Press and Peta that are dedicated to ensuring that companies really comply with calling themselves free of animal cruelty, and grant them official badges that distinguish them for complying with those standards.

Although the certification process varies according to each organization, Leaping Bunny is known as the one with the strictest evaluation standards, and on the contrary Peta is the one that feels more flexible in that aspect, - perhaps it is for that reason that its logoIt is the most watched among beauty brands-.

On the validity of the logos it is necessary to review our consumption more exhaustively, especially in articles that are not necessary such as cosmetics.

To mention an example, we put the Colourpop and NYX brands.The first is prepared in Los Angeles, United States, where the testing with animals is prohibited and the second is part of the L oreal conglomerate, which is accused of testing with animals to distribute its products in the Asian continent, where it also manufactures The majority of them.

As we mentioned earlier, in Asia the tests with animals in makeup manufacture are allowed, and it is even one of its requirements;that certain products are tested ophthalmological and in direct animal fabrics, before being tested in humans.So if the brand you consume is sold in China, it is very likely that it has been subjected to this type of tests.

This regulation of requesting tests in animals for cosmetic use, in China specifically, is currently discussion to eliminate or restrict, at least in some products considered general cosmetics, but not for others that define as special use, newefficacy, use in minors, among others.

According to a worldwide study, the United States and Japan are the countries that most consume cosmetics;Mexico is located in place 11 and 3 in Latin America in that area (Argentina and Colombia take place 1 and 2 respectively).This despite the crisis by COVID19 and current pandemic.(Source: Statista, Beauty and Personal Care, Report 2020).

The cosmetics sales industry has not ceased launches and consumption has remained stable, in proportion to previous years.

According to Chamber data and Association of the Personal Care Industry (Canipc) in our country, an average of 250 to 300 pesos is spent on a makeup product, where the sale of at least 168 units of such products was estimated annually, according to their statistics in 2014.

These figures have been increasing in 2020, according to Kantar consultancy.During that year the investment at the citizen level increased, especially in the skin care category, in the consumption of products such as moisturizing and moisturizing creams and hair care, which came to generate a growth of up to 10.5 percent.

Little more than 6 thousand pesos a year is what a person in Mexico spends in makeup (Picodi 2021).According to a Picodi platform survey, only 4% do not use these products and the rest is used almost daily.Resulting in regular consumption articles and Covid19.(Source: https: // www.Picodi.com/mx)

Even when the proposals for health law are supported by the Senate camera, it remains to be reviewed whether those brands and companies that continue to experiment with animals and/or do not prove to be totally free of animal cruelty continue in circulation in Mexico.

Meanwhile as responsible consumers we can review the official logos or background of our products, and if applicable, look for options, that for the moment every day they add more and more to the list, that do not imply unnecessary damage to a living being.