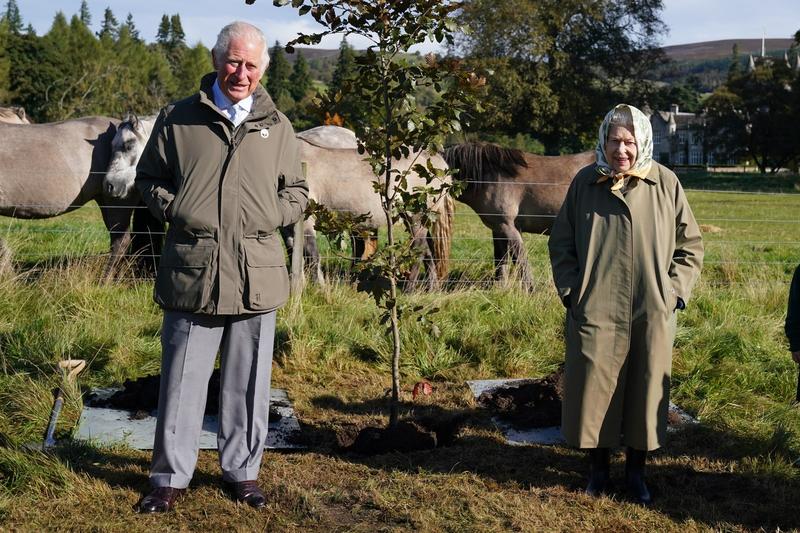 In 2022, Queen Elizabeth will celebrate her Platinum Jubilee, marking 70 years since she came to the throne. While some gala events are inevitable - perhaps she'll send messages with spectacular jewelry - one of her most notable endeavors is far more earthy. In May, the Queen herself joined Prince Charles in announcing a program called Plant a Tree for the Jubilee, urging people across the UK to honor the Windsors by improving the environment.

On Friday, the queen and Charles made their first in-person engagement to promote the program at a primary school near the family's Balmoral estate in Scotland. Wearing a raincoat and a leaf-patterned silk scarf in her hair, the queen joined her son for a forest school session at Crathie Primary School's cricket pitch. Afterward, mother and son dug a hole to plant a new beech, and the 95-year-old monarch really did her best during the process.

According to Hello, some students handed the queen a card, which she called "very nice," and Carlos joked about the future of the tree. "Let's hope she survives," he confided.

The magazine added that the school has a tradition of presenting the queen with a card at the end of each summer she spends at Balmoral. “It was a wonderful occasion for us,” said Lilian Field, the school's principal. "This is the first time we've given it to them in person."

The Jubilee tree planting project is just one of the initiatives launched under Queen's Green Canopy, an organization that is also running a variety of projects to raise awareness of the UK's ancient woodlands. Carlos is the sponsor of the project and his board is made up of forestry and environmental experts. The organization encourages people to start planting their trees between October and March, and has provided a step-by-step guide on its website.