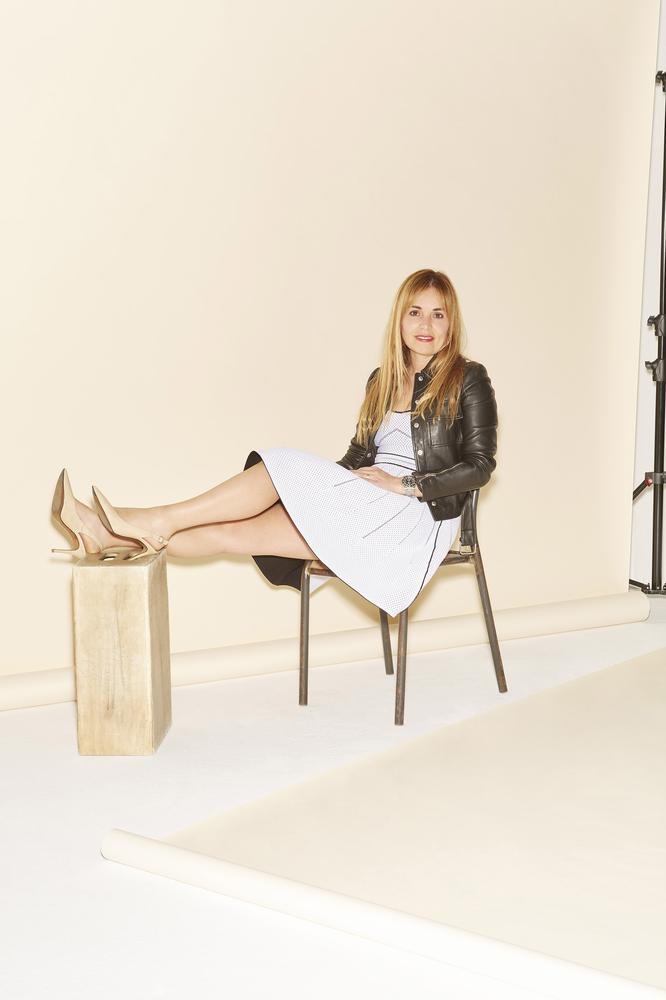 —Laya García, 42 -year -old businesswoman, grew up in Oviedo.She tells that her mother had there an beekeeping business (the beekeeper's house) and the propolis attached to the potential of the Asturian forests inspired her.She studied business, she made a master's degree on market trends in ICADE and a marketing postgraduate, and in 2008 the allergy that produced a solar filter made her "seek natural ingredients to avoid petrochemicals."This is how she decided to create Seaskin Life, a cosmetic brand whose philosophy is based on direct contact with the environment, aromatherapy and holistic experiences, and that saw the light in 2010.

—The 99% of their articles have an organic composition based on plants, with elements of products that create bees, such as real jelly, and present in hot springs and the sea.In this last section, and after years of research, it has developed a compound that joins the water of the spring of the royal spa of Las Caldas (Asturias) with a concentrated seabed prepared from the posidonia - which is harvested in the Salinas de Fornells(Minorca)-.The salts of the Balearic Island contain all minerals (magnesium, selenium, silica, lithium, copper, calcium) and trace elements that help restore the acid mantle of the epidermis.

—This ingredient, present in their creams, lotions, soaps and oils, has the denomination of lesser-native-natives 100% organic.With its topical application, it ensures that collagen production is stimulated, the elasticity and also the health of the skin is improved.

—All their containers are made of glass to preserve the properties of their ingredients.And its 45 products can be found in 65 spa and hotels with national and international spa, such as the Hermitage of Andorra or the Greco de Fuerteventura, as well as in its Oviedo store.As many are closed by the pandemic, this last year they have increased the sale online.

—With that challenge, his first baby nutrichetic (an anti -aging collagen supplement) was born and broke stock in pharmacies.Even for a year as complicated as 2020, the brand has grown up to 32%.“We use high quality assets and peptides of maximum bioavailability.Many of Luxmetique products are patented, ”explains Chacón.In addition, he says that most of his assets have efficacy and clinical trial studies.

—The team of experts working for Luxmetique is made up of biochemists, pharmaceuticals, nutritionists and biologists who develop new formulations.It currently has nine nutrichetic products focused on beauty and well -being and two topical application serums.

—This year, the firm is scheduled four new releases: one of them will be a formula with beneficial assets to prolong the longevity of the cells and thus try to achieve general well -being in the body, in addition to maintaining the youth of the skin.

—The creation of the products is done in an important food accessories factory located in La Rioja.It is a Made in Spain from beginning to end that has certifications such as the GMP that guarantee quality and, above all, the safety of each of its articles.

—They pre -worked and skin care, GuillerminThe needs of women of all ages.After four years of studies and intense research work, the firm saw the light in full pandemic, "a difficult but exciting time," says the creator.Among its products, for example, a specific collection for mestizo and black skin "that helps to unify sun spots and has protection factor."

—Nacked in Equatorial Guinea, at five years Mekuy moved with his parents to Madrid, where he later studied Law and Political Science at the Autonomous University.

- Before creating his own firm, in 2008 he returned to his native country again and occupied the positions of Minister of Culture and Tourism (she was the first woman to hold this position), Secretary of State for Culture and Senator.She also founded Meik magazine, the essence of miscegenation (2013), a multicultural publication that is currently a digital magazine (www.meikmag.com) and an editorial to give voice to new writers.She created the National Equatorial Guinea Library and a network of public libraries throughout the country.Since 2016 she lives in Madrid with her family, but her relationship with the Central African country is still very narrow."I feel linked to both cultures," she says.

- The pillars of the brand founded by Mekuy are the care and protection of the skin under the flag of diversity at an affordable price.“The care of my skin has always been present in my life.Since childhood, my mother instilled that we should apply cream daily.I like to take care of myself, but I also like to take care of others.That is why she was clear that she had to create practical, effective and affordable cosmetic products, so that everyone had access to them, ”she explains.

—The water containing creams has been outrafiltrated so that it has great purity and, thus, get a greater fixation of the skin components to increase its effectiveness.

—Clé Clémentyne is a fully Spanish production brand manufactured in Toledo.Cosmetics are formulated following the maximum of using the least possible number of possible ingredients, with effective and safe assets for all skin types.

—The last launch of the brand, Lui, is a product for the care of the skin of men that contains collagen and vitamins A, C and E, designed to recover luminosity and hydration.A new market niche in which it has just been released and in which it hopes to make a place.

—With the same name as its creator, the high -end firm Miriam Quevedo distributes in 23 countries, many of them in Asia.It currently exports 80% of its sales, and although the pandemic meant a hard initial setback, it has made them reinforce online sale, even creating a digital consulting service.

"His passion for cosmetics began when she helped her mother in the herbalist owned by the family, in Barcelona.There she discovered the potential of the pure raw materials that hid the plants and their benefits for the skin and hair.She investigated each ingredient until she became an expert and her creations began to have a great demand among herbalist clients.

—With aesthetics, a degree in Economics and with a master's degree in small and medium -sized companies, in 2005 he launches his own brand.She does it in collaboration with her husband, owner of a cosmetics research and development laboratory."The result?A product line formulated with high concentrations of exclusive compounds [gold, caviar ...] ”.Includes from rejuvenating treatments for hair and scalp to personalized rituals for the most advanced skin care.“In my mixing formulations botanical and organic ingredients with state -of -the -art peptides.It is about using the best raw materials and finding the perfect synergy between nature and science, ”explains the Catalan businesswoman, which she prefers not to say her age.

- harmful chemicals - more than 80% of their compounds are natural, organic or biological - their products are free of parabens and sulfates, and seek to reduce their impact on the environment.Instead of using chemical detergents -based cleaners, they incorporate natural surfactants of botanical origin with the environment and skin.

—The firm is replacing conventional plastic with 100% recycled plastic from sugarcane.

—When Bilbao María Unceta studied pharmacy at the Complutense University of Madrid, she dedicated her vacation to investigate: she provided help in a pharmacy of Vitoria in exchange for allowing her to create her own formulas.Some of them ended up in the trash, but others, such as her anti -cellulite cream based on caffeine, carnitine and ruscus, had great success.That encouraged her to develop her own cosmetic line.

- "I collaborated with the Chair of Galenica and Pharmacology, I familiarized myself with the use of plants and I thought that they were good for medications, they also had to be to formulate cosmetic products."And this was born María D’Uol in 1990. "My engine has always been to develop formulas that did not exist in the market."Thus she launched in 2002 one of the first BB Creams ("I was looking for a remedy for my own spots") or in 2007 its hyaluronic acid serum.

—The true professional bum came to him in 2015, when he launched his Oncology line, which he formulated to prevent, relieve and repair the side effects of chemotherapy and radiotherapy on the skin.The idea of creating these products was born when Unceta's mother suffered from cancer, and the pharmaceutical company found that treatments caused irritation, itching and hypersensitization in the skin.That is why his cosmetics have a mist of mist, much more delicate with the dermis.Today, the line has been renamed Carmen in tribute to her mother.

—In the fundamental consideration of what are the side effects of chemotherapy and radiotherapy and how with a good diagnosis and the appropriate product, the quality of life of people under treatment can be improved.

—As through the national health network, form nurses and medical personnel in oncological cosmetics and teach in the 60 clinics and 600 aesthetic centers in Spain where their articles are distributed.She has more than 100 references in the market and a trajectory of more than 25 years of work, rigor and dedication.Today he fights for the internationalization of his signature and, because of the pandemic, to improve his presence in the digital market.